Recently, a homeowner submitted an architectural request to paint the exterior of his home a beige color and the shutters a dark brown. The request was denied by the ACH Committee, due to the fact that the colors too closely resembled those of the house next door. The Committee responded to the request and asked that the homeowner select different colors. The homeowner then submitted two tiny color sample squares, each about as big as a half dollar. The siding color appeared to be a light blue and the shutter color a dark blue. 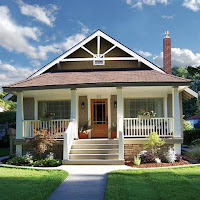 The Committee initially felt these colors were too different from the rest of the community and wanted to remain more neutral. The homeowner claimed the colors were almost identical to what he currently had on his house (a grayish blue siding with dark blue/navy shutters). After much deliberation the Committee approved the second request, and the paint job was completed a few days later.

Immediately, the complaints and photos starting to roll in as neighbors questioned whether or not the homeowner had received the proper approval to paint his house. One of the paint colors turned out to be a very bright, bluish/purplish, almost fluorescent color…which looked significantly different than the small sample that had been submitted and approved. Surely these were not the colors that the Committee had approved??? Once the Committee went back and compared the samples to the house, they realized they were indeed the same colors approved…whoops!

The Board and the Committee then brainstormed to try to figure out what could be done that would be agreeable to both the homeowner and the Association. If the color remained, it could potentially reduce property values for all. Not to mention, the Board was getting complaints left and right. As a result, the Board ultimately decided that if the homeowner was agreeable, the Association would pay to re-paint the siding up to $750.

But the issues didn’t stop there. The Board and Committee then needed to find a vendor who would agree to do the job for around $750. Since the Association was relatively small (composed of approx 100 homes), they couldn't afford to repaint the house for much more than $750. To avoid additional angst, the Board did not want to inform the homeowner of the ongoing issue until they had located a vendor to complete the job. But, because the homeowner was not aware of the issue, the vendors could not get onto the property to get accurate estimates for repainting the home. What a mess!

Want to avoid putting yourself or your community in this position? In order to prevent this from happening, communities should establish an approved color palette, which homeowners can choose from when deciding to repaint their homes. Boards should consult with a professional paint vendor or design team when putting this together to ensure continuity and quality. If your community does not have this option, at a minimum require the homeowner to paint a small portion on the rear of the home for the Committee to review and agree upon before approving a request.

If and when your community does adopt a color palette, incorporate it into your Design Standards. Send these updated standards out to everyone in the community and post them on your community’s website. That way no one can say they never received the information, making your job easier and less stressful for your homeowners, too.