For Community Association Managers, often the largest and most intense parts of the job are enforcing the covenants, design standards and rules of the community.  Even though every homeowner signs a document acknowledging these regulations at the time of a home purchase, it is a daily struggle to enforce rules with some owners.  Most homeowners are great people to work with; however, there are always those “special” situations that are over the top.

In one Atlanta community, the Association has a rule stating no outbuildings are permitted.  A homeowner made several modifications to a property without approval, including installing an outbuilding.  Upon learning of this, the Association asked the homeowner to submit the modifications for approval to the Architectural Control Committee (ACC) (some communities call it an ARC).  As you may guess, the ACC approved the modifications that were within community standards but disapproved the outbuilding.  The homeowner attended an appeals hearing with the Board of Directors, as is often required in most Associations, where he made an impassioned plea to keep the unapproved outbuilding.  The Board reaffirmed the ACC decision to disallow the outbuilding as it did not meet community standards.

After some time and many letters, the Association filed suit against the homeowner for removal of the outbuilding and damages.  So what makes this situation over the top?  It took over seven years to reach a resolution on this situation!  The outbuilding is now gone and has been replaced by a structure acceptable to both the homeowner and the Association.  The unfortunate outcome is the incredible amount of time and money involved in reaching this resolution, along with the needless stress everyone experienced.

Lessons?  As a homeowner, it is very important to know and follow the rules of your Association when making any modification to your property.  Simply following the rules in this case could have avoided this entire confrontation.  As an Association, you need to be proactive in resolving disputes.  Be clear on why something is a violation and why it cannot be allowed to continue.  Try to drill down to find the heart of the dispute and work with the owner to find a satisfactory resolution for all.  Unfortunately, a situation like this cannot always be avoided, but in most cases it can. 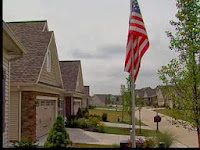 A decade ago, another Atlanta community had a dispute with a homeowner over flagpoles.  The community rules explicitly stated, “No flagpoles in the front yard”.  The flagpole in question was installed without approval.  The Association required the removal of the flagpole.  Even given the protection of the right to fly the United States flag and the pitched patriotism in the midst of wars in Iraq and Afghanistan, the Association was able to obtain removal of the flagpole.


Fast forward several years:  Same community, same rules, same situation; much different result.  The Association went to court on the second flagpole case and lost; the flagpole was allowed to stay and all accumulated fines were removed.

Lessons?  Association rules may tread on the rights of citizens.  It is also true that citizens have the ability to relinquish some of their rights as is done when someone buys a home in an Association.  That being said, rules should be carefully reviewed with a critical eye.  Any rule that could be controversial or sensitive should be well considered.

In this situation, fighting a veteran flying a flag is certainly not ideal and other options should be considered:  Alternative ways of flying a flag, such as on a pole attached to the house or on a porch, or perhaps determine a way to have flag poles as a harmonious part of an overall landscape plan.

Proactively harmonizing regulations to reach key goals that enhance the community should be what every Association strives for.
Posted by Access Management Group at 2:12 PM