Back in April 2008, a thirteen year old boy and his friends were taking turns pushing a standing dead tree back and forth - while also recording it on a cell phone video.  Some younger kids gathered to watch, and the older boys had everyone move back for safety.  After several minutes of pushing the tree back and forth, the tree started cracking, and after further pushing - the tree finally collapsed, striking and fatally injuring the thirteen year old.

The boy’s mother sued the Association, saying that it should have known about the presence of the dead tree and had failed to take safety precautions to have the tree removed.  The Association defended itself by saying that the boy assumed the risk by choosing to act even though he knew of the danger.

The mother then claimed that a child of her son’s age was incapable of evaluating and accepting the risks, allowing peer pressure to cloud his judgment in a way which an older person would not.The Appeals court noted that in Georgia, it is situational as to whether any particular child between the ages of seven and fourteen is capable of assuming risk. Although courts do not expect children always to appreciate dangers to the same extent as adults, they recognize that children as old as the deceased child were quite capable of appreciating certain obvious dangers. 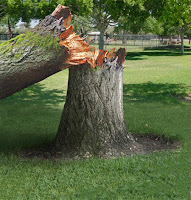 In response to the mother’s claim that the children doubted that the tree would fall and did not think that they would get hurt - the court found that this merely reflected the children’s assessment that injury was unlikely; it was not evidence that they denied the possibility that the tree might fall.

It is critically important that Associations have their grounds frequently inspected to spot potential hazards, and have them addressed immediately. At a minimum, hazardous areas must be immediately roped off with “caution” tape until repairs can be made.  Most communities only order monthly property inspections by their management companies, so it is a good idea for the Board to set up an inspection group to check around one or more times each week to ensure everything is as safe as reasonably possible.
Posted by Access Management Group at 7:53 AM