Pay Up! (Or At Least Budget For It)

Boards of Directors often wonder how their community's budget compares with those of other communities.  They face constant pressure to keep assessments low, to the detriment of reserve (capital project) accounts.  Anemic budgets are then further aggravated by the issue of homeowners not paying their assessments. Delinquencies are the driving factor when forecasting next year’s budget!


Reviewing nearly a tenth of the communities in the Atlanta Metro area (of the approximately 3,000 homeowner associations/condominiums in this region per the Georgia Secretary of State) yielded interesting results. 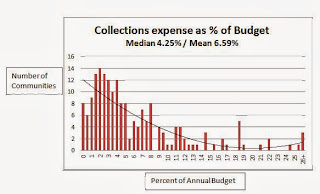 Communities like to spend as little as possible in collection activity, but even when plans call for only spending one or two percent of the annual budget in this area, a community often ends up spending between four and six percent.  For communities with very high nonpayment rates, it is common to see ten percent or more of the budget allocated to collections.
When it comes to delinquencies (defined as a homeowner past due at least $500), there was no correlation between size / type of community and delinquency rate.  While a handful of communities had zero delinquencies, the majority are experiencing between seven and twelve percent of their homeowners in arrears.  Some communities actually are running above a seventy percent delinquency!

Obviously, this situation was exacerbated by the Recession beginning in 2008.   Reviewing data trends from 2008 through 2012 revealed that:
As of September 2013, the average (both mean and median) delinquency rate for condominium homeowners was $4,800.  Surprisingly, those living in detached single family homes also showed high delinquencies:  The average mean was $3,145 / median was $2,585 for delinquent homeowners.  266 homes were identified as owing over $10K, with 42 of these owing over $20K.  Delinquencies in some homes exceeded $60K!
In light of the above, it is critically important that Boards budget for nonpayments to avoid shortfalls in their communities.  Money not set aside for this contingency will result in neglecting maintenance needs, or requiring the use of special assessments or savings set aside for capital projects, which is never a good choice.